Ahead of the Birmingham 2022 Commonwealth Games, George from the Young People's Sport Panel had the exciting task of supporting the Queen's Baton Relay as it made its way around Scotland.

Here's how he got on.

In my role as a member of sportscotland’s Young People's Sport Panel (YPSP) I had the opportunity to spend a week travelling around Scotland with the Queen’s Baton Relay in the lead up to the Commonwealth Games in Birmingham this summer.

The Baton spends over a year travelling around the Commonwealth countries in the lead up to the games. I was amazed by how modern the Baton is, including a 360° Camera, heart rate monitor, LED lights and a message from the Queen herself, that won’t be read until the opening ceremony! The Relay began in the Highlands from Inverness, with a stand out highlight coming from a boat trip on Loch Ness before finishing the day in Oban. Day 2 was on the Isle of Arran which included two ferry trips and some stunning weather - I didn’t want to leave in the evening, it was incredible.

Day 3 included Dumfries House, New Cumnock, Glasgow and Bo’ness. Day 4 was in the capital, Edinburgh, in which we concluded the day on top of Calton Hill with the Minister for Sport, Maree Todd. One funny moment was when a Spanish lady asked if Maree Todd was my mum, I had only met her for five minutes!

The Scotland leg of the relay then finished on day 5 in the Borders, visiting Peebles and Selkirk, to see the mill in which Team Scotland’s tartan is made. It was amazing to see the whole process and the story behind the design and the West Midlands police were loving getting to dress up in kilts. We then concluded the trip in Dumfries.

I spent a lot of time with Colin Millar and Stuart Turner from Team Scotland who organised the whole five day leg and kept everything running smoothly. Along the way we also met the Chair and CEO of Team Scotland, as well as many athletes and of course the inspiring baton bearers who had been nominated for the work they do in their communities.

I was especially inspired by Emma, from Trees for Life, who showed us around their forest area and the work the they do to ensure the protection of endangered tree life within Scotland.

"Her knowledge and dedication to her work really showed through and it was a great way of showing how Birmingham plans to be the first ever carbon neutral Commonwealth Games." 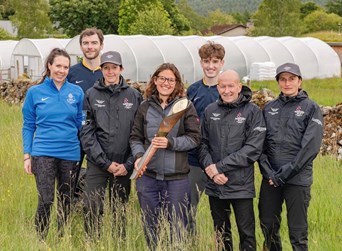 We were also joined by a team from Commonwealth Games Birmingham who assisted with the journey and who we formed a really close bond with. Finally, twelve police officers from the West Midlands who had been specially selected to protect the Baton when travelling and at venues. Their team spirit and banter really kept energy levels high towards the end of long days! It also made me realise how important it was to ensure the security of the baton and how it is under 24 hour watch by extremely experienced officers.

It was also brilliant chance to witness the amazing skills of the content creators, videographers and photographers who joined us on the trip. Not only watching their expertise in capturing the pictures and emotions of different situations, but the speed in which they edited and uploaded content while travelling between venues was incredible! I even got to give a helping hand filming and created daily ‘Behind the Scenes’ reels on the @Team_Scotland Instagram, and my picture holding the Baton was included in a BBC News article!

An opportunity like this not only educates you on how event planning works but develops your communication skills and ability to use your initiative in unfamiliar situations. Spotting an issue before it becomes one or offering a hand to someone in a pressurised situation.

"I’m really keen on getting involved in more sporting events as a result of this opportunity, eyeing up the UCI Cycling World Championships which are being held in Scotland next summer." 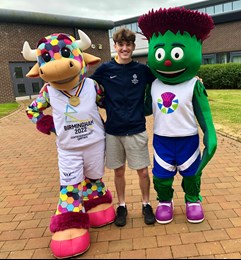 The days are long waking up for breakfast and a debrief at 6:30am and not getting to the next hotel room until 9pm, with 4 venues and almost 100 miles travelled each day! Keeping energy levels high was definitely a challenge at times.

There are always small hiccups or last minute inconveniences but ultimately, excellent preparation and planning coupled with talented and hard working individuals meant Scotland’s leg of the relay was a real success!